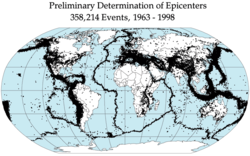 The earthquakes or seism are sudden movements of the earth's surface that demonstrate the existence of huge internal forces at Earth.

The seismic waves arrive and depart from [1]:

Primary waves
The primary waves are the first ones to be received by the seismograph because they are the fastest ones. They are also called longitudinal waves or compression waves as they vibrate the particles of the rock in the same direction of wave propagation. They propagate both in solids and liquids.

Secondary waves
The secondary waves are recorded by the seismograph for the second because they have lower speed to the first and also the transverse, as they vibrate the particles of the rock in the direction perpendicular to that of propagation. They do not propagate in liquids.

Long waves
When the primary waves and secondary arrived in earth's surface, produce the long waves also called surface dette, who they are responsible for the most violent shocks.

Earthquake in the sea[edit | edit source]

The earthquakes in the sea occur because the epicenter is located on the seabed therefore the seismic waves propagate in the water causing the formation of a giant wave called a tsunami; this wave becomes increasingly high as it approaches the coast.

For this purpose it is used the Mercalli scale which was conceived by the seismologist Giuseppe Mercalli and is divided into 12 levels of increasing intensity. The Mercalli scale is not very precise; In fact, two earthquakes, despite having the same intensity, can cause different effects depending on where they occur a (city, desert) and the type of buildings that are found there (buildings, earthquake resistant or not).

The Richter scale is divided into ten degrees and allows to compare among them several earthquakes because it is based on objective data.

The Richter scale is "open", that is not expected maximum value; the highest so far recorded a magnitude value is 8.75. 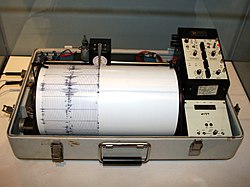 The seismic waves are recorded with the 'seismograph' and the seismograms, records showing the seismic waves of different types, and you can get a lot of important information such as. the magnitude and duration of an earthquake or its epicenter [4].

Knowing what are the high seismic risk areas it is important to prevent victims and the damage that earthquakes cause.

Geologists have represented in seismic zones cards high, medium and low seismicity, based on the intensity and frequency of earthquakes.

There are some measures that the building respects to limit the damage caused by earthquakes in towns: it limits the height of buildings, are built wide streets, you increase the space between a building and the other, they protect or isolate pipelines and chimneys, because they often follow earthquakes to fires, the most suitable construction material is reinforced concrete.

Task of civil protection is organizing assistance in the event of the occurrence of the earthquake, instructing the population, including through exercises, on what to do in time of emergency, such as at school in evacuation simulation.

What to do in case of an earthquake[edit | edit source]

The avant-garde was in the earthquake-resistant buildings is Japan. It is considered the most seismic country in the world.