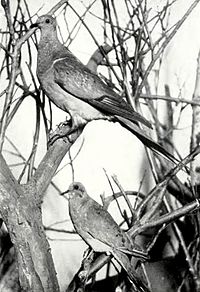 A pair of passenger pigeons

The passenger pigeon, also known as wild pigeon (scientific name: Ectopistes migratorius) was a species of pigeon that used to live in North America. It disappeared in 1914, mostly due to human hunting. It used to migrate over North America in great flocks. These flocks were said to darken the sky.