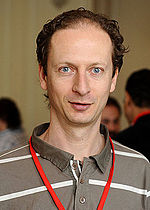 Mathias Damour (France, 1975), best known as Astirmays is a prominent user of Wikipedia in French. He is known for creating Vikidia in French on November 2006. Damour also later created several versions in other languages.[1]

Following the proposal of a user from the French Wikipedia, the possibility that between the users and the Wikimedia Foundation an encyclopedia for children was evaluated. The idea was to do some Wikipedia articles which would be selected, and then tailored to a young audience. This discussion also moved on to other language versions of Wikipedia.[2]

Damour, who is an attached user to this project, (registered under the name of Astirmays), and the Wikimedia Foundation differed in which texts should be created, and edited by the children themselves. The two parties could not reach a close agreement on that discussion. That is why on November 17, 2006, Damour, based on his own autonomous decision created Vikidia independent of the Wikimedia Foundation.