Joan of Arc in armor (miniature of the fifteenth century). Imaginary and idealized portrait

Joan of Arc, called the Maid or the Maid of Orleans, was born in Domrémy (Lorraine) on the 5th or 6 January 1412. She was burned alive in Rouen on May 30, 1431 at the age of only 19. Joan of Arc was a woman who lived in France during the Hundred Years' War and fought for the King of France, Charles VII.

Her life, her legend[edit | edit source]

Joan's father, Pierre d'Ailly or Arc or Tailly, was a prosperous farmer, well known in his village and her mother was Isablet of Vouthon. Vouthon was the name of a small village known also as Romée, referring to a pilgrimage to Rome.

Eldest of five children, she was very religious. She often would go to church to pray. When she was 13, she told of hearing the voices of saints and archangels. These voices whispered to her to go and meet the Dauphin Charles VII, then ousted from the succession to the throne of France by his rival, the King of England. The voices told her to liberate France from the invaders (the English) and to crown the Dauphin at Rheims.

Despite the reluctance of her family, she managed to leave Lorraine, crossed France and met Charles at Chinon. She overcame the reluctance of the King and his entourage by her candor, her faith, her confidence and the enthusiasm that she aroused in the people. Charles agreed to let her go to Orleans to break the siege made there by the English. She managed to restore the confidence of the exhausted French soldiers and the attackers abandoned the siege on the night of the 7th or 8 May 1429.

After that victory, Jeanne convinced the Dauphin to crown himself King at Reims, the city where the Kings of France have traditionally been crowned for centuries, but situated in the middle of territory controlled by the enemy. The victory at Orleans restored confidence in the Dauphin's cause and the population, although dominated by the English, let them pass. The Dauphin was crowned on the 17 of July 1429 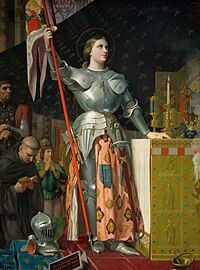 Joan of Arc at the coronation of Charles VII in Reims Cathedral. Painting by Ingres, 1851.

After that, Jeanne continued the war. She failed to retake Paris, held by the supporters of the Duke of Bourgogne. She was captured on May 23, 1430 at Compiegne by the Duke of Bourgogne's soldiers and then sold to the English. As much as the French saw in Jeanne the incarnation of divine will, the English saw in her a sinner dedicated to the devil. They brought a heresy trial against her, but only succeeded in accusing her of a few faults: wearing men's clothes and leaving her parents without permission. Frightened by the judges, Jeanne signed the confession of her sins: she acknowledged that she had been wrong to dress like a man and to make war like a man. But, back in prison, she wore pants again in unclear circumstances. For the English, she therefore broke her word and fell back into her errors (she had relapsed). She was condemned to die by flames and was burned alive at Rouen on May 30, 1431.

Her importance in the war[edit | edit source]

Before the arrival of Jeanne at Chinon, France was half occupied by the English and their allies. The previous King of France, Charles VI, was mad and had left his wife, the Queen Isabeau de Baviere, alone. Many people thought that Charles VII was not the son of the previous King, but a bastard, an illegitimate son.

The madness of the King caused a great weakness in the kingdom. The princes of the royal family vied for power. The English took the opportunity to invade. The French royal army was annihilated at the battle of Azincourt in 1415. The Queen was forced to sign a treaty, the treaty of Troyes, which stipulated that, on the death of Charles VI, the mad King, the French kingdom would return to the son (Henri VI) of the English King, the grand son of Charles VI and not to the son of Charles VI. But on the death of Charles VI, the son of the King of England was not more than a year old! He was not crowned King therefore, because he was too young. For his part, Charles VII did not have the means to be crowned King, because the coronation city, Reims, was in the middle of enemy controlled territory; and in addition many people thought that he was not the son of the King.

Joans' actions changed everything. The victory at Orleans broke the impression that the English were invincible. The coronation, in the middle of enemy territory, had a great importance: it made it clear to the French population, in the lands occupied by the English, that the true King was Charles, chosen by God, and not the English King. This change in mindset allowed the French to win the war in 1453, twenty years later, the new King now being supported by the people.

The signature of Joan of Arc

Even now, the town of Orleans celebrates her liberation every year through organising the Joan of Arc festvals, known as Joanic Fetes, around late April or early May.