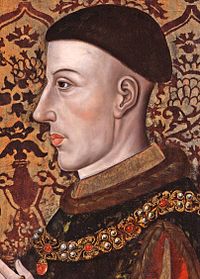 Henry V is a history play by William Shakespeare. It was written about 1599, and probably first performed shortly after it was completed. It was published in quarto form and finally in the First Folio of 1623.

It tells the story of King Henry V of England. It focuses on events immediately before and after the Battle of Agincourt (1415) during the Hundred Years' War. In this play, Henry renounces the dissipated life he led in the Henry IV plays, and renounces his crony Falstaff. Falstaff dies offstage in this play.

Henry V is the last play in a cycle of plays about the Wars of the Roses. The cycle begins with Richard II and follows through with Henry IV, Pts. 1 and 2. Shakespeare's source for all four plays was the Holinshed's Chronicles.