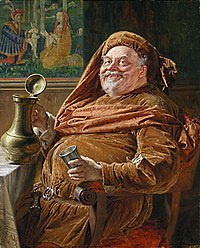 Henry IV, Pts. 1 and 2 are two history plays by William Shakespeare. They follow Richard II in Shakespeare's cycle about the Wars of the Roses. The two plays tell of the troubled reign of Henry IV and the rise to power of his son, Hal as Henry V. These two plays are followed by the final play in the cycle Henry V. Shakespeare's source for these four plays was the Holinshed's Chronicles.

The plays are memorable for the character of Falstaff, a fat, old, cowardly knight. Falstaff is universally considered one of Shakespeare's greatest creations. Other memorable characters are Mistress Quickly, Hotspur, Justice Shallow, and Bardolph, Pistol, and Nym, Falstaff's cronies.