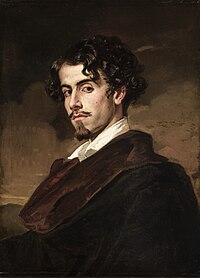 Gustavo Adolfo Bécquer,[1] whose real name is Gustavo Adolfo Domínguez Bastida, was born in Seville on February 17, 1836 and died in Madrid on December 22, 1870 at the age of 33, was a Spanish poet of the Romantic Movement. It should be noted, that the poet gained popularity after his death, when his works were published, and not in his life. Bécquer had noble ancestors.

His father died on January 26, 1841, when Bécquer was only four years old, whereas his mother passed away on February 27, 1847. After his mother died, Bécquer met his great friend, Narciso Campillo.

His paternal uncle, Joaquin Dominguez Becquer, was interested that he participated more in painting and said the phrase: "You will never be a good painter, but a bad man of letters."

In 1856, he went with his brother to Toledo, seeking inspiration for his future book, "The history of the temples of Spain".

In 1857, Becquer, despite his youth, became suddenly affected by tuberculosis, which made him seriously ill, even though he made a favorable recovery. In 1863, he had another disease relapse.

It is known that during his lifetime he flirted with various women like Josefina Espin. Although as at that time he did not have a lot of popularity, the life of Bécquer did not appeal to this beautiful woman.

Becquer suffered a major depression and led a bohemian life, that did not quite convince other people known by Becquer.

His works and ideology were normally of terror or love in case of poetry (Bécquer was known for flirting with women, although he didn't succeed.)

His closest family devoted themselves to painting. Even his brother, Valerian Becquer, painted the most famous and renowned works of Gustavo Alolfo Becquer. Although Becquer was interested more in poetry after the death of his parents he also was familiar with paintings and produced small works and sketches.

In 1860 Bécquer publishes another work called "Cartas literarias a una mujer" (Literary letters to a woman).

Three months before the death of Gustavo Adolfo Bécquer, his brother, Valeriano Bécquer died which left the poet in a deep depression.

He died on the 22nd of December in 1870 at the age of 33 after a winter chill, typical for that time of the year that managed to end his life. Of his personal life, it is known that he married Casta Esteban y Navarro and from the marriage he had three children. During all his life he was changing his home, he lived in Toledo and in Madrid, and more so he had the desire to succeed during his life, and he tried it, leaving Madrid several times, although it ended in failure, definitely he acquired more popularity after his death.

In his life Becquer wrote many poems, normally long and without consonant rhyme.

The dark swallows will return

on your balcony their nests to hang

And again with their wings at the crystals

playing, they will call.

But those that fly were holding back

your beauty and my joys to contemplate;

those that learned our names,

those, will not return!

The lush honeysuckles will return

To your garden to climb the walls

and again in the afternoon, more beautiful still,

Her flowers will open

But those curdled dew drops

Whose drops we looked at trembled

Will return from love in your ears

your heart, from its deep sleep

But silent and intent and from my knees

As a God is adored before his altar

How I have desired you..., undeceive yourself

Therefore... they will not love you!

"Como en un libro abierto" (Like in an open book)

I read from the depths of your pupils

Can the lips feign

Laughter belied by the eyes?

to confess that you wanted me a little

Cry! No one watches us.

Bacquer was born under the reign of Isabel II, "She of the Sad Fates," during which time the Revolution of 1868 also occurred, dethroning the monarch and giving rise to a dispute over who should hold power, creating regents like Francisco Serrano Dominguez, and, later, the restoration of the monarchy with the Italian king, Amadeo I. During his lifetime, the following events also occurred:

Also, and the most important thing, is that he was born and passed away both in the 18th century.