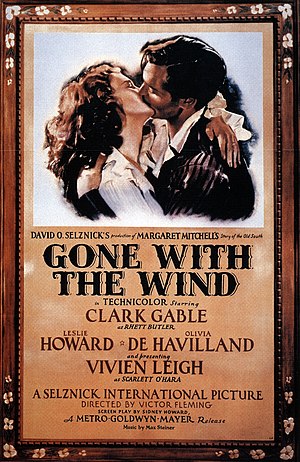 Gone with the Wind is a movie based on a book of the same name by Margaret Mitchell. The movie was made in the United States, and released to theatres in December 1939. It is one of the most beloved movies in American history. Many Americans declare it to be their favorite movie.

The movie follows its heroine Scarlett O'Hara as her lazy days of plantation balls and barbeques come to an end with the American Civil War. She survives the war to become a cold, calculating businesswoman. For many, the center of the movie is Scarlett's sexual attraction to virile Charleston bad boy, Rhett Butler, and her romantic yearning for the aristocratic but effete Ashley Wilkes of Twelve Oaks plantation. She marries Rhett, but Ashley is devoted to his wife Melanie and beyond Scarlett's conniving grasp. The movie ends with the weary Rhett Butler walking-out on Scarlett with the famous line, "Frankly, my dear, I don't give a damn!"