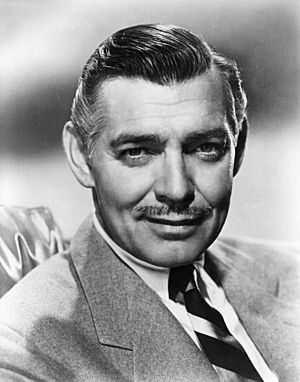 Clark Gable (February 1, 1901 – November 16, 1960) was an American stage and screen actor. He is best known for his roles as Fletcher Chrisitian in Mutiny on the Bounty (1935), and Rhett Bulter in Gone with the Wind (1939). He won the Best Actor Academy Award for his work in the screwball comedy It Happened One Night (1934).

Gable was born in Cadiz, Ohio, and died in Hollywood, California. He was married several times and had one child, John Gable. He was one of the greatest male leads in movies, and was partnered with the greatest actresses of the day. He was named the seventh greatest male actor of all time by the American Film Institute.