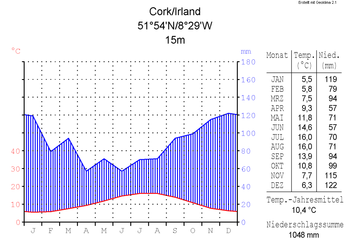 The climate of Ireland is a temperate oceanic climate. It is mild, moist and changeable with abundant rainfall and a lack of temperature extremes. The Atlantic Ocean and the warming influence of the Gulf Stream affect weather patterns in Ireland.

Rainfall is the most common form of precipitation in Ireland. Rainfall is more prevalent during winter months and less so during the early months of summer.

Temperatures differ regionally, with central and eastern areas tending to be more extreme. Inland areas being cooler in winter and warmer in Summer than their coastal counterparts.

The climate of Ireland is warmer than other areas on its latitude. Because it lies in the north-eastern Atlantic Ocean, and as a result is warmed by the North Atlantic Current all year. This current also ensures the coastline of Ireland remains ice-free throughout the winter

Air frost occurs frequently in the winter, with most areas seeing over 40 days of air frost every year. (Kilkenny, has an average of 53 days). Frost is rarer along the coast.

Rainfall is the most common form of precipitation in Ireland. Some parts of the west coast receive over four times as much rain as the east coast (like Dublin).

Rainfall is more prevalent during winter months and less so during the early months of summer.

Severe cold weather is uncommon in Ireland ; although hills and mountainous regions in the country can see up to 30 days of snowfall annually,

Sunshine duration is highest in the south-east of the country where there are less clouds. The sunniest months are May and June.