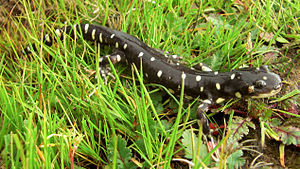 The California tiger salamander (scientific name: Ambystoma californiense) is an amphibian living in California, United States. This species is endangered.

The California tiger salamander is a fairly large, secretive amphibian. Adults can grow to a total length of about 7–8 inches.

It has a stocky body and a broad, rounded snout. Adults are black with yellow or cream spots; larvae are greenish-grey in color. It has brown protruding eyes with black irises. California tiger salamanders can live up to 15 years.

Adults are known to eat earthworms, snails, insects, fish, and even small mammals, but adult California tiger salamanders eat very little. The salamander cannot burrow effectively, but lives in the burrows of other creatures such as gophers. Their underground life is not well known by researchers.

Mating takes place in the autumn or early winter. The female then travels to the nearest pool of water. The eggs hatch in 10-14 days. The larvae feed on other small invertebrates, including tadpoles. When their pond dries, they lose their gills, develop lungs, and then the metamorphs leave the pond to find a burrow.