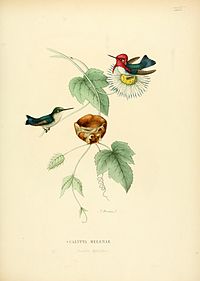 The bee hummingbird, zunzuncito or Helena hummingbird (scientific name : Mellisuga helenae) is the smallest bird in the world. It lives in the forests and woodlands of Isle of Pines and in Cuba. It measures about 5 cm (2 inches) in length. The male is smaller than the female. The bird feeds on nectar.

The female bee hummingbird builds a cup-shaped nest made of bits of cobwebs, bark, and lichen. The nest is only about 2.5 cm (1 inch) in diameter. Nests have been built on single clothespins.

She lines the nest with soft plant fibers. In this nest she lays two eggs, which are no bigger than peas. She incubates the eggs and raises the young alone.

It has less feathers than all other birds, as well as the highest body temperature of all birds. It eats up to half its body mass in one day. It drinks water roughly eight times its body mass on a daily basis.

The bee hummingbird is a "Threatened" species. Its living spaces are diminishing due to human developments and farming.