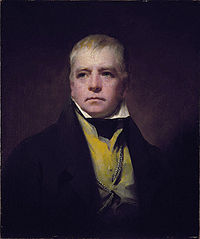 Walter Scott was a British novelist and poet. He was born on 15 August 1771 at College Wynd, Edinburgh, Scotland, and died on 21 September 1832 (aged 61) at Abbotsford, Roxburghshire, Scotland. He married Charlotte Carpenter (Charpentier). The couple had five children. In 1818, Scott was made a baronet.

Scott was a poet and historical novelist. His poetical works include The Lay of the Last Minstrel, The Lady of the Lake, and Marmion. His historical novels include Waverly, The Bride of Lammermoor, Rob Roy, Ivanhoe, Quentin Durward, The Talisman, and Kenilworth.