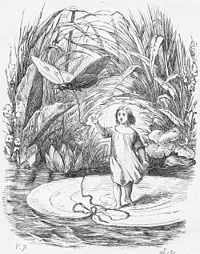 Thumbelina is a fairy tale by Hans Christian Andersen. It was first published in Danish in 1835 in Andersen's Fairy Tales Told for Children.

The tale was completely Andersen's invention, though he was probably influenced by stories of tiny people such as Tom Thumb and Gulliver's Travels.

The story was very popular with the public and the critics. It has been adapted to an animated movie and a live-action television program.

Thumbelina is a tiny girl no bigger than a thumb. She is stolen from her cradle by a toad, is set adrift on a lily pad, is captured by a big bug, and tends a field mouse's house through the winter.

When the field mouse urges her to marry an old mole, she flies away with a swallow to a warm and pretty country. There she meets a flower fairy prince just her size and the two live happily ever after.