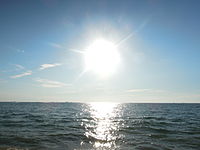 The Sun, shining above the ocean. 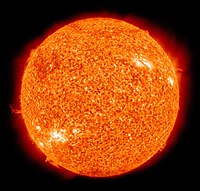 The sun, as viewed by a satellite.

The Sun is the star around which the Earth, and the whole solar system turns. Viewed from the Earth, the Sun appears as a circle of light in the sky. The rotation of the Earth around itself makes the Sun seems to turn around the Earth. The Sun rises at the East, and sets at the West. When the Sun rises, it is day, and when it sets, it is night.

Most of energy forms on Earth are due to the Sun.

The sun was born five billion years ago. The best hypothesis is the "nebula hypothesis" for wich the sun was a nebula that is overheated and is became bright.

Sun have a precise structure.

From inner to outer: