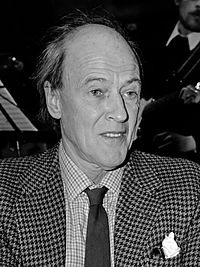 Roald Dahl was born on 13 September 1916 in the city of Llandaf in Wales. He was a famous writer. He died on 23 November 1990, in Oxford, at the age of seventy-four years.

Roald Dahl wrote some books for children like "James and the Giant Peach" ; "Matilda" ; "Fantastic Mr Fox" and "The BFG", but his most famous novel for children is "Charlie and the Chocolate Factory". This book was adapted in film.

Roald Dahl wrote some books for adults too, like "Tales of the Unexpected".

Characters in his books[edit | edit source]

Famous characters in his books include Charlie, James, Bruce Bogtrotter and Augustus Gloop.

When Roald Dahl was 3 years old, his sister, Astri, who was 7 years old, died of appendicitis. In 1953, he married an American actress, Patricia Neal, with whom he had 5 children. After 30 years together, they divorced. Later, Roald Dahl married Felicity Crossman.

In November 1939, at the beginning of the Second World War, Roald Dahl joined the Royal Air Force. He was an aircraftman, and his service number was 774022.

One day, his plane "Gladiator" crashed in the western desert of North Africa. It was in September 1940. He suffered severe injuries to his head, nose and back. He was taken to the Anglo-Swiss hospital of Alexandria, in Egypt. He stayed 6 months at the hospital to recover from his injuries.