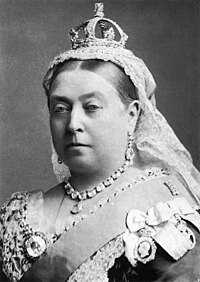 Victoria (real name Alexandrina Victoria) was born on 24 May 1819 in Kensignton Palace in London and died on 22nd January 1901 at Osborne House on the Island of Wight.

She was queen of the United Kingdom from 20 June 1837 to 22nd January 1901 and empress of India from 1 May 1876. Her parents were Victoria of Saxe-Coburg-Saalfeld and Edward-Augustus of Kent.

She inherited the throne at 18 years old after her father and his three brothers died, without any legitimate and surviving children.

She married to Albert of Saxe-Coburg and Gotha on 10 February 1840 in London. Together they had nine children : Victoria, Edward, Alfred, Helena, Louise, Arthur, Leopold and Beatrice.

Her eldest son, Edward VII, succeeded her to the British throne.