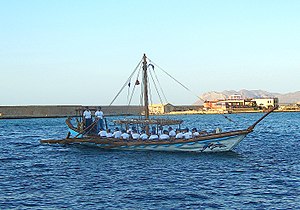 Replica of a Minoan ship

The Minoans also had control over Thera and Rhodes, two Greek islands, along with having had some control over the coast of Turkey.

In the Knossos palace.

The Minoans built houses of stone and brick, but their most elaborate buildings were palaces and shrines of stone. Uniquely in the Mediterranean, the Minoans did not build defensive walls around their cities. Instead, their palaces had many open porches lined with red columns, and many windows to admit the Mediterranean sunlight. They adorned the edges of their roofs with curving ornaments that looked like bull's horns. Each of their palaces centered around a large open courtyard, where they held dances and athletic events. Many of the palace walls were covered with frescoes, or paintings in which the paint is mixed with the plaster on the wall. Some frescoes showed men and women, ships, farmers, fishermen, dancers, nobles, and all sorts of people living very elegant, happy lives. Others showed dolphins leaping in the sea, or imaginary animals like griffins, which are half-lion and half-eagle. Many frescoes show a sport commonly known as "bull-jumping", whereby the competitors would try to somersault over an angry bull as it charged around. Whether this practice was religious or a sport is unknown. Some people think it might be mythological and may have never happened at all.

The island of Crete was rich in natural resources. They had access to wood, copper, farmland, stone and coastal areas. The Minoans were successful with farming and grew grain, herbs, olives and fruit. Much of the spare food was traded to make money for the island.

A tablet showing the Linear B writing system

The Minoans used a style of writing that scholars today call Linear A. Towards the end of Minoan Civilization a new style of writing began to appear in Crete and elsewhere on mainland Greece. This was named Linear B. Unfortunately there are not enough examples of Linear A to enable us to decipher the script at present. Linear B, however, was deciphered in the 1950s by Michael Ventris who discovered that it was in fact a very early form of Ancient Greek, used at that time by the Mycenaeans. The presence of clay tablets with the Linear B script in Crete suggests the presence of Mycenaeans on the island during that last part of Minoan civilization, though it cannot be said with any certainty in what capacity they were present on the island. It is possible that after the collapse of Minoan civilization the Mycenaeans invaded Crete and took over the island.

The Minoans wrote their language on long, thin tablets of clay with a stylus or stick. The writing has lots of different symbols, and scholars believe it is a type of writing called a syllabary, in which one symbol stands for a consonant-vowel combination. There are many Linear A symbols that may stand for whole words, though, because many of the tablets were found in storage rooms where the Minoans kept supplies of food, drink and equipment. The tablets which have come down to us exist because they were "fired" in the high temperatures created by the fires that destroyed the main palaces of Minoan Crete.

Minoan goddess statue with snakes (from Knossos, around -1600.

Because no one knows how to read Linear A, no one knows exactly what the Minoans believed. Because there are so many women in the frescoes on the walls of Minoan palaces, some people think that women ruled the Minoans. It is possible that they worshipped a female god, because there are very few statues of male gods at Minoan archaeological sites, while there are a great many female goddess statues.

One of the most common types of Minoan goddess statue is of a woman, wearing traditional Minoan clothing - the skirt and bodice. However, two snakes twine around her arms, and a bird of some sort perches on top of the crown on her head. Some of these statues are made of pottery; others are made of ivory and gold. They are found at a great many sites all around Crete and on some other Mediterranean islands.

Another god that the Minoans may have worshipped was a sea-god. Many Minoan palaces are adorned with curving shapes of stone that look like the horns of a bull. These horns may represent just the bull, but some scholars believe they mean more than that. The Greeks told stories about a king of Crete who had a very dangerous monster with a bull's head trapped under his palace, and that the monster, called the Minotaur, regularly ate both men and women. Scholars think this may have been a story about a Minoan god who accepted human sacrifices.

Small, basic tribes of people lived on the island from around 6000 BC. They lived this way for thousands of years, until in 2000 BC they rapidly advanced into the first civilization of Europe. The reason for this is not known, but some people think that Egyptians may have traveled to Crete and bought ideas and technology with them. The Minoans were successful because of their farming and fishing - they were not a military power. They also controlled the trade in the Aegean Sea and this made them very rich. Their navy was one of the strongest in the world and because of this they did not have to build walls or towers on their island. The Minoans suffered from natural disasters. The palace of Knossos was destroyed in 1700 BC and rebuilt. Around 1550 BC, the volcano Thera erupted and may have caused a tidal wave which devastated the coast of the Minoan kingdom. From then onwards, their control of trade weakened and they were not so successful. Many people believe that the Minoans were eventually invaded by barbarians who attacked mainland Greece first and then Crete itself. The civilization had died out by 1000 BC. Santorini (Thera) was largely destroyed by the huge eruption of 1550 BC.

In around 1550 BC, a volcano on the island of Thera ninety miles north of Crete erupted, and blew two-thirds of a whole island into ash and flying rock and hot gas. The volcano caused an earthquake, which knocked down many buildings on Crete and killed many people. Afterwards, a tidal wave rolled out from Thera, and washed several miles inland on Crete. The palaces and other monuments of the Minoans were further damaged, many people died during the earthquake and the tidal wave, the Minoans themselves entered a period of decline.

Sometime around 1480 BC, another Civilization from mainland Greece crossed the sea, and invaded Crete. The Minoans were still recovering from the Earthquake and tidal wave, they didn't know that another Civilization was coming to destroy them, they tried to defend the town but the army was still weak they failed, the other civilization conquered the ruined towns and built their own palaces to replace those destroyed in the earthquake and tidal wave. They used the Minoan alphabet to write their own language, called Linear B, and took control of the Minoan towns, fields, and fishing grounds for themselves. Another theory is that the Minoans were not invaded until much later, and had continued to survive, despite not being as successful as before.

Although some of the people on Crete today might be descendants of the Minoans, the Minoan culture has vanished completely. The legacy of Linear A, the writing system, has still not been translated and continues to be a mystery.

There are two famous Minoans in mythology. The first is King Minos, from whom these people and their civilization are named by scholars today. King Minos was believed to be a just and honest ruler, and the ancient Greeks believed that when he died, the king of the underworld made him a judge over the dead. The second famous Minoan is Ariadne, king Minos's daughter, who helped Theseus, a Greek hero, defeat and kill the Minotaur, and later became the wife of the god Dionysus.