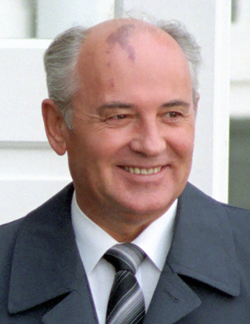 Mikhail Sergeyevich Gorbachev Born on March 2nd, 1931. On 11 March 1985, 54 years old, he was elected general secretary of the CPSU and ruler of the Soviet Union. He tried to reform the going bad (from not moving) communist rule by introducing Open discussion -openness, and Perestroika -breaking down

In 1988, Gorbachev announced that the Soviet Union would abandon the Brezhnev Doctorine, and allow the Eastern European countries to turn to democracy, if they wished. This led to the amazing string of non-violent revolutions in Eastern Europe in 1989. This effectively ended the cold war, and for this Gorbachev was awarded Nobel's peace price in 1990.

These attempts failed, and the collapse of the Soviet Union happened in 1991. Gorbachev quit as President of the Soviet Union on December 25th 1991. (He renamed his position to president in 1990.) Gorbachev is generally well regarded in the West for having ended the Cold War. However in Russia, his reputation is very low because it is perceived that he brought about the collapse of the country.

Gorbachev was in a commerical for Pizza Hut.