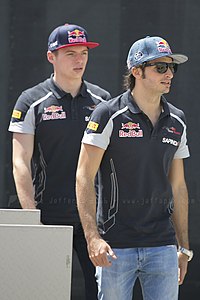 Max Verstappen (born 1997) is a Formula 1 driver who has a Dutch and Belgian nationality, but pass under the Dutch flag. He is 19 years old. He started racing when he was 17 years old. He is in the Red Bull Racing team. His father, Jos Verstappen was also a Formula 1 driver. Max's mother is called Sophie Kumpen. He is considered by many as one of the best Formula 1 drivers in the world. Max won in Barcelona and it also won the honor. He was the youngest driver to win a grand prix in F1. He also has the prize "Sportsman of the Year 2016" won. He is also the youngest winner of that prize.

In August 2014, Verstappen joined the Red Bull Junior Team after testing a Formula Renault 3.5 car. He also considered an offer from Mercedes to join their driver development programme. Six days later, he was confirmed as one of Scuderia Toro Rosso's drivers for the 2015 season. It was confirmed that Carlos Sainz Jr. would be Verstappen's teammate, following Daniil Kvyat's promotion to Red Bull Racing. Verstappen chose 33 as his race number.