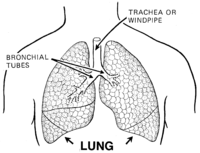 The lung is an organ that allows Humans and other creatures to breath in the air. Humans and other animals have two lungs, but many other animals (such as the snail, or the slug, for example) have only one. A lung looks like a bag inside the body, that fills with air and empties as breathing takes place. This is called inhaling (breathing in) and exhaling (breathing out). Oxygen-rich air is carried to the lungs via the trachea or windpipe. It passes into smaller parts of the lungs called alveoli, where it passes into the blood and gets distributed round the body via the circulatory system. In return, the blood brings carbon dioxide back to the lungs, which is removed from the body when breathing out.