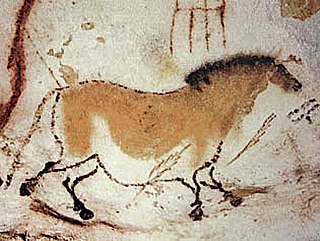 Cave painting of an horse at Lascaux.

Lascaux is the name given to a number of caves in southwestern France famous for their cave paintings. The original caves are located near the village of Montignac, in the Dordogne département. They contain some of the most well-known Upper Paleolithic art. These paintings are estimated to be 17,000 to 18,000 years old. They primarily consist of realistic images of large animals. Many of these animals are known from fossil evidence to have lived in the area at the time. Lascaux was added to the UNESCO World Heritage Sites list in 1979.

The caves were discovered in 1940. By 1955, about 1200 people visited them every day. They were then closed and restored. Replicas of the cave paintings were made in another cave nearby. Today, the original cave is no longer accessible to the public.