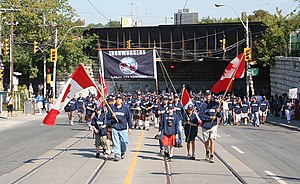 Labour Day (Labor Day in the United States) or May Day is an annual public holiday held in honour of working people.

Labour Day has its origins in the labour union movement.

In the United States, during their congress of 1884, the American labor unions give themselves two years to impose to their employers a limitation from the working day till eight o'clock. They choose to begin their action May 1, dates the moving day because many American companies begin this day their fiscal year, and because contracts have their term this day, the worker that must move (where from the term of moving day) to find some work.

The general strike of May 1, 1886, impulsed by the anarchists, is a success.