Jorge Luis Borges was a writer from Argentina. 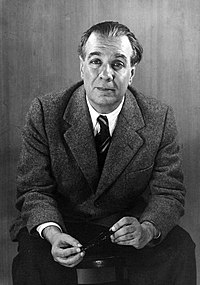 In 1955 the government made him the honorary head of the national library of Argentina. He spoke many languages. He was a professor of English Literature at the University of Buenos Aires.

His writing was not about what is real. It had many ideas which had special meanings.