From Vikidia, the encyclopedia for 8 to 13-year-old children that everybody can make better
(Redirected from Caaba)
Jump to: navigation, search 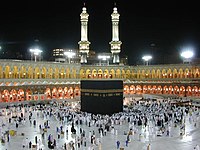 The Kaaba in the Great Mosque at Mecca

The Kaaba (also Caaba) is the center of the Great Mosque at Mecca, Saudi Arabia. It is the holiest Islamic site in the world. Muslims around the world must face the Kaaba when praying.

The Kaaba is a square stone building with a sacred Black Stone in the south-eastern corner. The Kaaba is covered with a black veil. It stands on the site of a preislamic shrine said to have been built by Abraham.