In religion, Abraham is an important man in the Bible. He is considered by Muslims, Christians, and Jews to be the ancestor of the patriarchs and the father of monotheism.

Abraham and Sarah (originally Abram and Sarai) were an old couple. They always dreamed of having a child, but they couldn't, because Sarai was sterile and they were too old! But they were great believers. One day, Sarai told Abram to have a child with Hagar, their servant, to fulfill their dream, and Ishmael was the fruit of this union. But Abram realized many years later that Ishmael was an unruly and unbelieving kid. God told the old man that he and his wife would have a real son, Isaac, so Abram was the first man that God made an alliance with. But Hagar and Ishmael were jealous, so they didn't care of him when their masters confide him to them, therefore Sara sent them away. 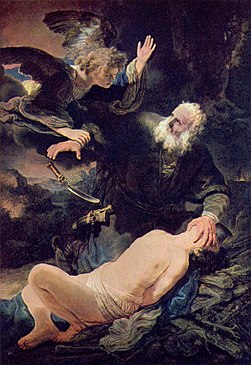 The sacrifice of Isaac

Years went by and Isaac became a great believer and an honest and polite guy, like his father. But one day, God told Abram to sacrifice his son in place of a goat or a sheep. Abram was scared. He thought that he made a mistake so God wanted to punish him. But he still did it. He tied his son to a table of sacrifice, and only seconds before he killed Isaac, God told Abram: Don't do pain to this child! Now I know that you are ready for all to your God. And I will reward you. Abram and Sarai will now be called Abraham and Sarah. After that, he continues: Do you see the stars in the sky? You will have as many descendants as the stars.

The descendants are in fact the Abrahamic believers (Jews, Muslims, and Christians).

The historic existence of Abraham hasn't been confirmed.