Blobfish out of water.

The Blobfish (scientific name: Psychrolutes) is a marine fish which lives at very great depths in the abysses of Australia and New Zealand.

"Blobfish" is its English name, in reference to its slack appearance. Indeed, the blobfish is very well adapted to its environment and its body is slack and gelatinous, giving it a strange look when you take it out of the water.

There are actually several species of blobfish, which are very similar.

While people don't eat it, the blobfish is nonetheless an endangered animal due to overfishing. 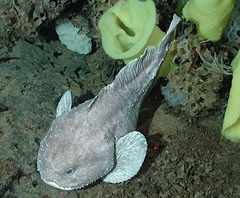 A blobfish (Psychrolutes phrictus), photographed near the bottom of the sea. There are some sponges next to it.

The blobfish really is a strange animal. Its weird appearance has gotten it classified on the internet as the "World's Ugliest Animal". Furthermore, it is not very well known, and very few people have had the chance to see it in its natural environment.

This is normal: the blobfish lives near the bottom of the sea, at very great depths: up to 1200 meters! Because of this it's very difficult to observe, and most blobfish that can be seen are those which have been brought up to the surface by fishermen.

Although the body of the blobfish looks very bizarre when brought up to the surface, it is perfectly adapted to the bottom of the sea. For instance, the blobfish has no swim bladder (the swim bladder is a pouch filled with gas, like a small balloon inside the body most finned fishes; by inflating or deflating the swim bladder, a fish can float more or less high in the water, using Archimedes' principle by varying in density).

But at very great depths, the water exerts enormous pressure which would probably burst the swim bladder, most "normal" fish therefore wouldn't be able to live this deep. But the blobfish has no swim bladder. It disappeared from its ancestors a long time ago. As a result, they do not fear large pressures and they can therefore live very deep in the ocean.

Without a swim bladder, one might think that the blobfish does not float, and that it should have to swim relentlessly to stop itself from sinking. The second special feature of the blobfish is that its flesh, that is to say, its muscles, have a gelatinous consistency and are less dense than water. Even though he has no swim bladder, the blobfish can thus naturally float a little above the bottom ocean without having to spend too much energy.

The blobfish is definitely very well adapted to its lifestyle in the deep.

With his gelatinous muscle, the blobfish is not a great swimmer: it is not very fast and therefore prefers prey that are immobile or slower than it. It is an opportunistic predator, that is to say, it eats whatever it happens to catch. They eat primarily pennatules, sea snails, or crabs. It can also feed on marine snow, a substance that falls permanently on the seabed from the surface.

Blobfish habits are poorly known, as very few have been observed in their natural environment. However, we often find scars of suckers on larger blobfish. So we think that blobfish, in turn, are eaten by larger molluscs such as squids or octopus. 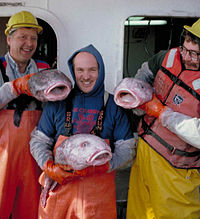 Fishermen who have just caught blobfish.

Because of its gelatinous and extremely acidic flesh, the blobfish is not edible, so it does not interest fishermen. Yet, paradoxically, it is a victim of overfishing. Fishermen use special nets called trawls to scrape the bottom of the sea and to capture crustaceans such as lobsters. However, these nets do not differentiate in the things they catch and thus capture many other species such as the blobfish.