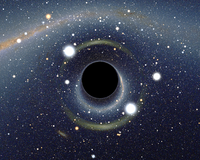 Artist's view of a black hole

A Black hole is an object in the universe that is so heavy it attracts everything around, including light, and thus appears as a "black hole".

Albert Einstein Say The Mass! if The Mass is Big The Time is Too Slow And Slow

Planets Near To Black Hole The Time Is Too Slow

In black holes, however, the black hole has such a great mass, that everything coming close from it is attracted, and has an immense weight, even the light. For someone looking at a black hole from a distance (better not to be too close, in this case !), he will see no light coming out from it, since the light itself is attracted. Thus the black hole appears... black.