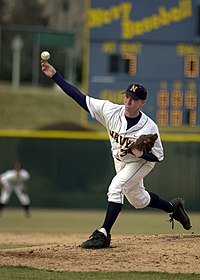 Baseball is a two-team sport invented in the United States. The game is played with a bat and ball in the spring and summer on a diamond-shaped field. It is known as America's National Pastime.

The only equipment needed for a game are a bat, a ball, and four bases. Each player should have a baseball glove. Baseball players wear special uniforms. The catcher wears several pieces of padding that include a chest protector and shin guards. 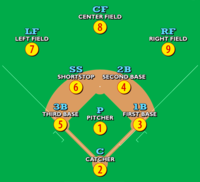 Positions of defending players on a baseball field

From a main corner called the "home plate", two lines at 90° delimit a field of play called "fair territory" that is divided in 2 main areas:

The other 270° around the home base constitute what's called the "foul territory".

In the offending team, a batter stands at the home plate. After having successfully hit the ball, he'll drop the bat and start running towards the first base: he's then called a runner.

When a batter successfully hits the ball with the bat, he runs the bases in succession until he either reaches "home plate" and scores, or is made "out" by a player on the opposing team and does not score. 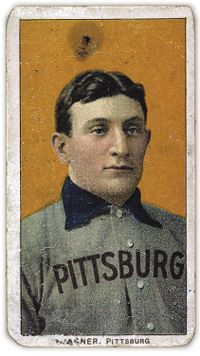 The Honus Wagner baseball card is the rarest of baseball cards and is worth hundreds of thousands of dollars.

Baseball has a long history. Some baseball fans claim that the game was invented in the middle 19th century by Abner Doubleday in Cooperstown, New York. This claim has not been proven. The World Series is played in October in the United States.

Great players of the game include Babe Ruth, Mickey Mantle, and Jackie Robinson. Baseball cards are small pieces of cardboard that feature a player's portrait and his statistics. Men and boys collect these cards; some cards are worth hundreds of dollars.

Baseball has inspired many books, plays, and movies. Famous books include The Natural by Bernard Malamud, Bang the Drum Slowly by Mark Harris, and Freddy and the Baseball Team from Mars by Walter R. Brooks. "Casey at the Bat" is a poem that is known to many Americans.

Movies include Pride of the Yankees starring Gary Cooper, 61* starring Barry Pepper as Roger Maris and Thomas Jane as Mickey Mantle, and Field of Dreams starring Kevin Koster. Plays include the musical comedy Damn Yankees, the gay-themed Take Me Out, and the Pulitzer Prize winner Fences.