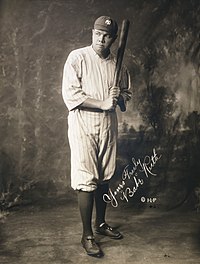 Ruth won his greatest fame as a slugging outfielder for the New York Yankees. He established many batting records, including career home runs (714), slugging percentage (.690), runs batted in (RBIs) (2,213), bases on balls (2,062), and on-base plus slugging (OPS) (1.164). Some of his records have been broken.

Ruth was one of the first five players to be elected into the National Baseball Hall of Fame in 1936. He died of cancer in 1948. Ruth is considered by many to be the greatest baseball player and hitter of all time.