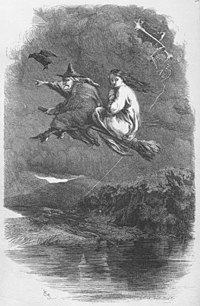 a witch flying on a broom

In folk tales a witch is a woman who can use magical powers.

In the past a lot of people believed that witches really existed and some women were killed and blamed for using magical powers. Nowadays, most people don't believe witches are real.