From Vikidia, the encyclopedia for 8 to 13-year-old children that everybody can make better
(Redirected from Wikijunior:Languages/Swahili)
Jump to: navigation, search

The Swahili language began to be spoken by the Swahili people who live on the coast of East Africa and on the islands near the coast, including Zanzibar, which is now a part of Tanzania. Swahili is an official language in Tanzania and Kenya. It has been influenced by many other languages like the Arabic language.

Although originally written in Arabic script, Swahili writing is now based on the Latin alphabet that was introduced by Christian missionaries and colonial governments.

The Swahili alphabet now contains all the same letters as English with the exception of q and x.

How many people speak this language?[edit | edit source] 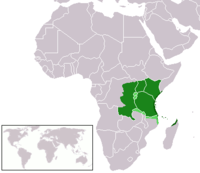 Distribution of Swahili in Africa

People primarily speak Swahili in Zanzibar and Tanzania. Swahili has become a language with which people can communicate within East Africa and the surrounding areas : There are smaller communities of Swahili speaking people in Burundi, Kenya, Mayotte, Mozambique, Oman, Rwanda, Somalia, South Africa, Uganda, United Arab Emirates, and the United States.

It is uncertain where or how Swahili first came about but it is general believed that Swahili speaking people have occupied their present territories, hugging the Indian Ocean, since well before AD 1000.

It appears to some researchers that Swahili started in a number of Arabic trading posts. People speaking different dialects of Bantu, a local language, found that it was difficult to communicate with one another, so they adapted Arabic and Bantu to create a language for business, Swahili.

Utend̠i wa Tambuka, which means "The Story of Tambuka", is one of the oldest known pieces of literature in Swahili. The author of the story identifies himself as Mwengo, son of Athumani or Osman. Little is known of him. The story is about "the Byzantine-Arab Wars" and "Byzantine-Ottoman Wars" between the Muslims and Byzantines, covering a period from 628 AD to 1453 AD (the Fall of Constantinople). Like other early Swahili writing it was written with the Arabic script.

Here are some interesting Swahili sayings that you can learn.