Treasure Island is an adventure novel by Robert Louis Stevenson. It was published on 23 May 1883. The story is about a treasure hunt on a desert isle. The novel established enduring images of pirates and piracy. Treasure Island has been made into numerous movies and television programs.

Young Jim Hawkins finds a treasure map belonging to a dead pirate, once a guest at his mother's seaside inn. His friends Dr. Livesey and Squire Trelawney organize a treasure hunt.

Unfortunately, pirates led by peg-legged Long John Silver interfere with the progress of the voyage and the hunt.

The book is responsible for establishing the popular modern image of pirates as peg-legged, eyepatch-wearing hooligans with parrots on their shoulders. Enduring motifs first established in the novel include treasure chests, treasure maps marked with an X, the Black Spot, and dotty old pirate castaways. 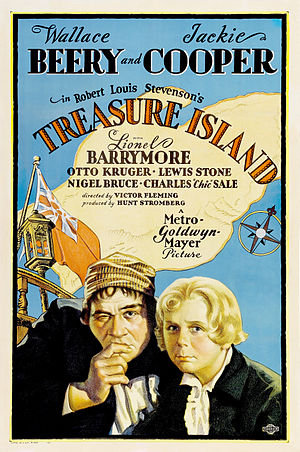 Poster for the 1934 movie production

Treasure Island has been adapted to movies and television programs numerous times. The most notable movie is probably the 1934 MGM version with Jackie Cooper as Jim Hawkins and Wallace Beery as Long John Silver.

In 1950, Treasure Island was the first color production and the first live action movie from Walt Disney Productions. It starred Bobby Driscoll as Jim Hawkins and Robert Newton as Long John Silver. Newton's interpretation of Long John Silver is the definitive version for many.