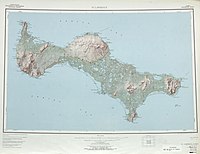 There are 2 villages on the island, Savoonga and Gambell. The Island is mainly inhabited by the Siberian Yupik. Hunting and fishing are very common activities on the island.

The island is believed to have been inhabited for more 2,000 years. The island was discovered by Vitus Bering on St. Lawrence's Day, August 10, 1728. This is why it is named St. Lawrence Island. By the mid-19th century, there were around 4,000 living on the Island. However, most of them died because they did not have anything to eat, which is why Reindeer are killed for meat. Reindeer were brought to the Island.

A plane that was used by the US Navy, specifically a P2V Neptune, was shot down by the Soviet Union. The crew was rescued by villagers. The Soviet military was under strict orders to "avoid any action beyond the limits of the Soviet state frontiers.". The Soviet government offered compensation.

At one point, from 1952 to 1972, there was a US Air Force base on the Northeast of the Island. Most of the buildings were destroyed in 2003 due to health concerns.