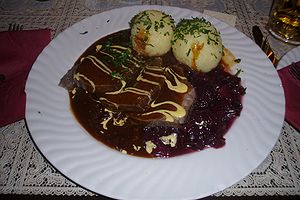 Sauerbraten is a dish made from meat and a marinade of wine or vinegar, water, herbs, spices, and seasonings. The meat may be beef, pork, venison, mutton, lamb, or horse, and is placed in a marinade from two to ten days to flavor and tenderize the meat. The marinade seasonings may vary. Sometimes raisins and ground ginger snaps are added to the marinade. It is sometimes served with red cabbage and potato dumplings. Sauerbraten is considered one of the national dishes of Germany. The word means "sour roast".