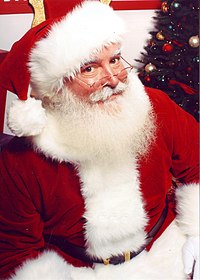 Santa Claus has a long white beard, and wears a red suit with white trim.

Santa Claus is a fictional Christmas character. He is loosely based on St. Nicholas, the patron saint of children.

Santa Claus is an elf who lives at the North Pole. He makes toys for children. He rides through the sky on Christmas Eve in a sleigh drawn by reindeer. He lands on the roof of a house in his sleigh, then drops down the chimney. He leaves toys for all the children in the house under the Christmas tree and in their Christmas stockings.

Over the years, many customs have grown up around Santa Claus. For instance, children write letters to Santa and mail them to his workshop at the North Pole. They leave cookies and milk for him on Christmas Eve, and carrots for his reindeer. In some places, children go to department stores to tell one of "Santa's helpers" what toys they want for Christmas.

Santa Claus in the United States, 1868

Santa Claus is a character in stories and poems such as The Night Before Christmas by Clement Clarke Moore, The Story of Santa Claus by L. Frank Baum, and the editorial "Yes, Virginia, there is a Santa Claus". There are many songs about Santa Claus like "Santa Claus is Coming to Town" and "Rudolph, the Red-Nosed Reindeer". Santa Claus has appeared in many live-action and animated movies and television programs.