From Vikidia, the encyclopedia for 8 to 13-year-old children that everybody can make better
Jump to: navigation, search
File:British Rail sandwich 01.jpg
Sandwich served by British Rail

A sandwich is a British culinary invention that consists of any sort of filling contained between two slices of bread.

Sandwiches are served both hot and cold. They are typically served for luncheon, but may also be eaten at any time. Sandwiches are usually held between the diner's fingers. 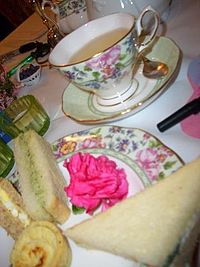 Cup of tea and sandwiches

Although the first sandwich is said to have been invented by John Montagu (1718-1792), 4th Earl of Sandwich, sandwiches are now known around the world.

Famous sandwich combinations include the peanut butter and jelly sandwich, the BLT, the Club, cream cheese and jelly on date-nut bread, grilled cheese, the fluffer-nutter, the meatball sandwich, the Egg McMuffin breakfast sandwich, watercress sandwiches, and the ham and Swiss on rye.