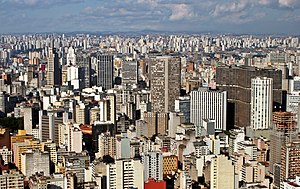 São Paulo was one of the host cities of the 2014 FIFA World Cup.