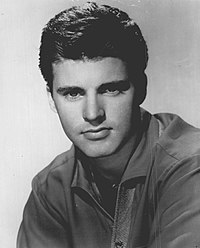 Ricky Nelson in a publicity photo for Decca Records, 1966

Eric Hilliard "Ricky" (or "Rick") Nelson was an American actor and rock musician. He was born on May 8, 1940 in Teaneck, New Jersey, the son of entertainers Ozzie and Harriet Hilliard Nelson. He died in an airplane crash on December 31, 1985 (aged 45) in De Kalb, Texas.

Nelson's career in entertainment began in 1949 when he played himself on his parents' radio series, The Adventures of Ozzie and Harriett. He debuted as a singer in 1957 on the television version of the series. He created a sensation with teenage viewers. He was one of the first teen idols.

Ricky as a boy with his brother Dave and his parents Ozzie and Harriet Nelson, about 1950

His first album Ricky was #1 in 1957, and "Poor Little Fool" became his first #1 single in 1958. He appeared with John Wayne and Dean Martin in the 1959 movie, Rio Bravo, and received a Golden Globe nomination for "Most Promising Male Newcomer".

Nelson married Sharon Kristin Harmon on April 20, 1963. They divorced in December 1982. The couple had four children. Nelson also had a child out of wedlock with Georgeann Crewe in 1981. Nelson was engaged to Helen Blair when they both died in an airplane crash in 1985.