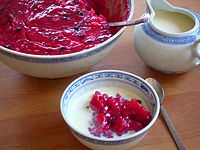 A dish of Rødgrød med fløde, made in the German style as Rote Grütze (Red grits) and served with vanilla sauce instead of cream.

Rødgrød med fløde (Danish: Red porridge with cream) is a traditional Danish dessert, comprising of a soft mixed red berry compote served with double cream. The dish is sometimes made with either sweet berries, such as strawberries or raspberries, or tart (sour) berries such as redcurrants and cherries but more often with a mixture of both.

Preparation (How it's made)[edit | edit source]

After boiling the fruit in water for about 5 minutes (until it's falling apart), it is strained and the juice from the fruit is kept back to make a sauce.

The juice is boiled, sweetened with sugar and thickened with a slurry of potato flour and cold water. Once the slurry is added, the juice must be removed from the heat or it will thicken too much and become inedible.

The berries are then added to the sauce and the dish is served topped with double cream or sometimes, milk.

The name of this dish is very difficult for non-native speakers of Danish to say. Danish people will often use it as a tongue twister with those who are learning the Danish language.

You can hear the Danish pronunciation by clicking the audio link below.

A recipe for Rødgrød med fløde in English