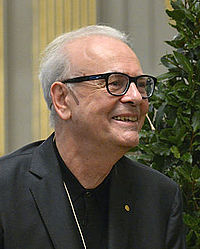 Patrick Modiano (born July 30, 1945 in Boulogne-Billancourt, near Paris) is a French writer. On 9 October 2014 he won the Nobel Prize for Literature awarded to: "has made ​​visible for the art of memory, with which he evoked the incomprehensible human destinies and the life world during the German occupation." [1]