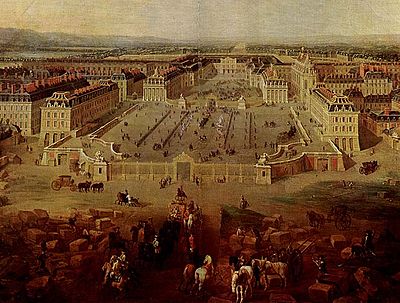 the Palace of Versailles in 1722

In English one often speaks of the Palace of Versailles. When the castle was built, Versailles was a country village, but it is now a suburb of Paris. From 1682, when King Louis XIV moved from Paris, until the royal family was forced to return to the capital in 1789, the Court of Versailles was the centre of power in Ancien Régime France. Versailles is therefore famous not only as a building, but as a symbol of the system of absolute monarchy.