Nuremberg is a city in Germany, located on the Pegnitz River with approximately 500,000 inhabitants. It is an important commercial center, artistic and cultural. The typical dishes are ginger and sausages. The most important building is the Gothic church of San Lorenzo. At the center of the city lies the hospital of the Holy Spirit one of the largest hospitals built during the Middle Ages. The main attraction is the fountain Beautiful. There is a toy museum that contains a collection of dolls, puppets and toy soldiers. To the north is also located the city airport. Christmas markets are an ancient tradition of the city. Sports are tennis and cycling. Famous is the medieval castle and the Nuremberg Trials.

There are some beautiful Christmas markets

There is a fountain named beautiful fountain

The territory is called Bavaria 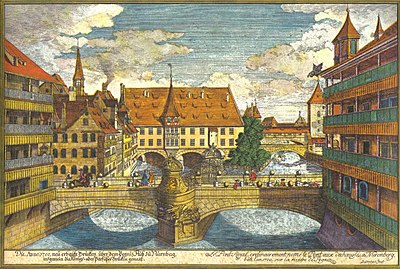