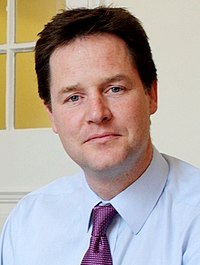 Nicholas William Peter "Nick" Clegg (born 7 January 1967) is a British politician and the former Deputy Prime Minister of the United Kingdom. He is the former leader of the Liberal Democrat party.

After the parties poor results in the 2015 general election, Clegg resigned and was replaced by Tim Farron.