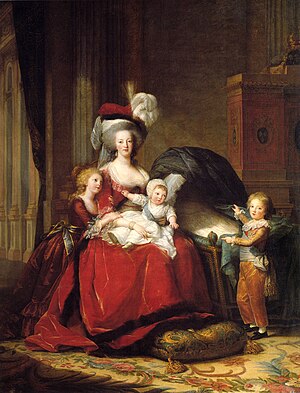 Marie-Antoinette and her children, oil on canvas, by Elisabeth Vigee-Lebrun, 1787

Maria Antonia of Austria (known as Marie Antoinette; 2 November 1755 – 16 October 1793) was wife to King Louis XVI of France. She was born in Austria to Maria Teresa, Queen of Hungary and Empress of the Holy Roman Empire. She married Louis of France in 1770.

As Queen of France, she was not actively interested in politics. Her lack of power, habits of spending money, and her bad reputation amongst the French people helped begin the French Revolution. She became of victim of the Revolution, and died on the guillotine on 16 October 1793.