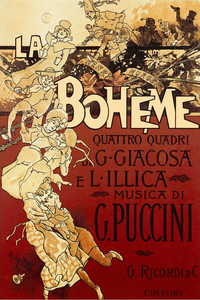 La bohème is a tragic Italian opera in four acts. The words were written by Luigi Illica and Giuseppe Giacosa. The music was written by Giacomo Puccini.

The opera is based on the book, Scenes from the Life of the Bohemians by Henry Murger. "Bohemians" were the poor artists, models, musicians, and poets living in Paris about 1830.

The opera is set in Paris during the winter months of 1830 or so. The story tells of Rudolpho, a poor poet, and his love for Mimi, a poor seamstress. At the same time, the opera follows Marcello, a poor, struggling artist, and his unhappy love for Musetta, a playful young woman who likes money, men, and good times. Rudolpho and Mimi separate after a month or two, but she rejoins him in the last scene to die in his arms of tuberculosis.

The premiere was conducted by Arturo Toscanini on 1 February 1896 in Turin, Italy. The first performances were not huge successes, but within a few years of the premiere, the opera was being played around the world. The opera has become one of the most famous and best loved operas all time.