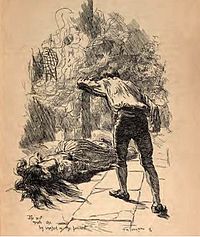 Jane Eyre is a novel by Charlotte Brontë. It was published on 16 October 1847 by Smith, Elder & Company of London under Bronte's pen name Currer Bell.

The novel is a coming of age story divided into five stages: 1) Jane's childhood at Gateshead, where she is emotionally and physically abused by her aunt and cousins; 2) her education at Lowood School, where she acquires friends and role models but also suffers privations and oppression; 3) her time as a governess at Thornfield Hall, where she falls in love with her employer, Edward Rochester; 4) her time with the Rivers family, during which her earnest but cold clergyman cousin, St John Rivers, proposes to her; 5) and the finale depicting her reunion with and marriage to her beloved Rochester.

With its focus on the heroine's developing emotions, thoughts, and morals, the novel is often considered to have changed the course of fiction in the western world. Jane Eyre has been adapted to movies and television programs several times.