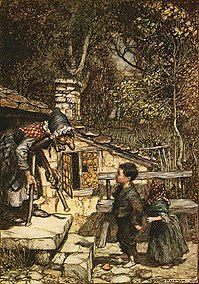 Hansel and Gretel meet the witch

"Hansel and Gretel" is a fairy tale by Jacob and Wilhelm Grimm. They collected the tale from storyteller Dortchen Wild in the town of Cassel, Germany. Wild later became Wilhelm Grimm's wife.

The Grimms published the tale in Children's and Household Tales in 1812. In succeeding years, some slight revisions were made to the tale.

"Hansel und Gretel" was adapted to an opera by Engelbert Humperdinck. This opera was first performed in Weimar, Germany, on 23 December 1893. This opera contributed to making the Grimm's fairy tale famous.

The tale has also been adapted to numerous television programs, notably a 1954 version of the opera featuring stop-motion puppets and the voice of comedienne Anna Russell as the witch.

The story tells of a young brother and sister who encounter a witch living in a gingerbread house deep in the forest. The witch eats children. She tries various ways to kill Hansel and Gretel, but is always defeated by the two clever children. They finally kill the witch by pushing her into an oven.