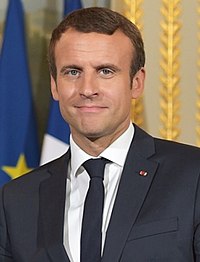 Emmanuel Macron (born August 12, 1954) is the current president of France. He has been the president since 2017. He creates in April 2016 the political movement "La République en Marche" (The Republic in Walk). He is the youngest French president of history. Before, he was minister of economy for François Hollande (August 2016-August 2017).