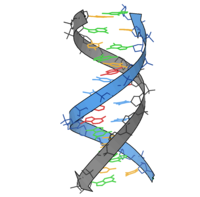 Scheme of a part of the double-helix-shaped DNA molecule.

DNA (for DesoxyriboNucleic Acid) is a substance, contained in the nucleus of a cell, that bears the genetic information.

Each living being starts as a mere cell, but yet "knows" how to develop itself : it is because its parents left him "schemes" of how to "build" itself : this is the genetic information.

The DNA is a great (really great: it can reach up to 4 cm, about 10,000 times bigger than the cell that contains it!) molecule that encodes the genetic information. It is so big that it wouldn't enter in such a tiny cell : it has to be wind on itself, to make kind of "spool" called chromosome.